The convection oven has been around for quite a while, but just a few years ago the air fryer has enter the scene when the first one was introduced by Philips. It uses Rapid Air Technology, and basically it uses hot air to cook food. So is there really that much of difference between air fryer and convection oven appliances? Which one is best for you? 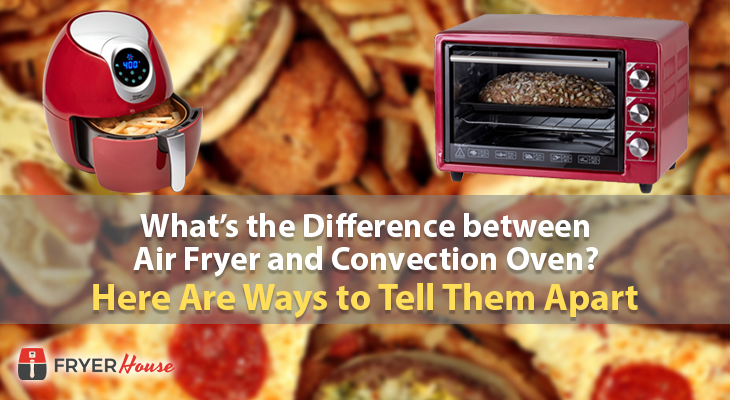 In many ways, convection ovens are very similar. They both cook food using hot air and they can get up very extreme temperatures. They also tend to have fans that move the air around. You can usually adjust the heat setting for both appliances, and there’s often a timer setting you can adjust.

But there are significant differences between air fryer and convection oven as well. Here are just a few of them:

You can choose between the two appliances depending on which cooking method you favor the most. Both can be used for roasting and baking. However, in general the cooking method with an air fryer is much more efficient, so that you can cook the food faster. An air fryer can also be used to produce much crispier food than what you can get from a convection oven. It does better with grilling food as well.

On the other hand, with a convection oven the food is much juicier than what you get from an air fryer. It also toasts bread much better, since you can’t really do this at all with an air fryer. It can also broil food, which isn’t an option for air fryers.

Convection ovens are in general much larger than their air fryer counterparts. It’s true that there are several huge air fryers, but for the most part you’re limited to cooking for just 4 people or so at one time.

In fact, some air fryers are meant only for a meal enough for 2 people. That makes the air dryer a rather portable appliance. It may take up a lot of space in your countertop, but it doesn’t need as much space as you convection oven.

On the other hand, a convection oven is meant to stay at one place. But it’s bigger, and with the convection oven you get a much larger capacity. This means you can cook more food at once so no one in the family needs to wait their turn before they can get their food. It’s also a much better option for larger families and bigger gatherings.

For the most part, both these appliances aren’t really all that hard to clean and maintain. But in general, the air fryer is much easier when it comes to cleanup.

The main difference here is that in an air fryer, you have a basket which catches all the drippings. You can then just take out this detachable basket, and most of the time you can use your dishwasher to clean it. You don’t have drippings to deal with in the air fryer main component.

That’s the main problem with the convection oven. The meat drips oil down, and that’s where the heating element usually is. This means all that oil accumulates and you’ll have to wash and wipe that part of the oven constantly. There’s no way you can put that into a dishwasher.

Another advantage with the air fryer is often you have a nonstick pan as part of the unit. So you don’t get sticky foods on the fan, and that makes the cleanup even easier.

In general, the build quality and durability of the unit depends more on the manufacturer. Get an air fryer or a convection oven from a well-known brand, and you can expect it to last for a long while.

However, it’s probably safe to say that the air fryer should last longer—if you pick one made by a famous brand. That’s because the overall design of an air fryer is much simpler, so you have fewer parts that can go wrong.

It’s different with a convection oven which often needs professionals if you wanted it installed properly in your kitchen. The greater complexity means that more things can go wrong. Also, the maintenance is more difficult and you may neglect it. That’ll cause an earlier breakdown in the convection oven.

If you have a limited budget, then perhaps you’re also limited to just getting an air fryer. You can get a cheap one for $150 or so, and the best ones can go for about $300.

The difference here is that a convection oven is much bigger, and the way it operates is more complicated. That means the production costs are greater, and therefore the prices are higher.

So now you know main difference between air fryer and convection oven. Which one should you pick?

Get the convection oven if:


An air fryer is your better option if:
So which one is best for you? Only you can decide that for sure, though hopefully this comparison makes that decision a lot easier to figure out!

3 Methods for How to Clean Smoker Racks?

Philips Airfryer Instructions: How to Use Your Airfryer – Fryer House